This should be a fun one! Bring a picnic and join us outdoors at Shamrock Park. We'll be playing the Amphitheater which is close to the corner of Hickory and Lee Streets. This show is free and family friendly so come on out and say hello - hope to see you there!

Sunday nights in the summer are for live music in Bel Air! Whether you prefer acoustic guitars, big band, or jazz, the Town of Bel Air welcomes you with a variety of free concerts each summer! The Summer Concert Series, which takes place at the William A. Humbert Amphitheater in Shamrock Park, provides an opportunity to get your friends together or to get the family out of the house for a while for an evening of great music. The Sunday evening concerts start at 7:00pm and the types of performers vary from blues to classical to patriotic. Grab dinner at one of the many great downtown restaurants and then walk to the park for the concert. Don’t forget about the adjacent Shamrock Park to keep the kids and grandkids entertained while you wait for the performance to begin. The events are sponsored by the Town of Bel Air through the Bel Air Recreation Committee. Call 410-803-9784 for weather related changes 2 hours before the concert start time. Jazz, swing, & klezmer! 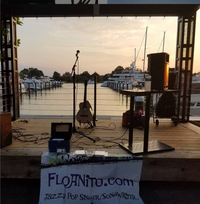 Looking for a fun way to spend happy hour? I'll be back at the Pearl Street Busking Stage, Friday July 15 down at the Wharf! Grab a seat on the patio of Kirwan's and I'll sing you some tunes! Don't feel like a drink or food? Just come hang by the stage. There are plenty of places to sit :) I'll be playing from about 5:15 until 7 and this is a free show (though tips are greatly appreciated) so come on out and make a request. If I know it, I'll play it :) Hope to see you there!

I'm super excited to be back at the Birchmere performing as part of the Newmyer Flyer Laurel Canyon tribute! This show features some of the DMV's best local artists singing some of the best songs from one of the best eras of music! I'll be joined by MARGOT MACDONALD, LUKE BRINDLEY, SARA CURTIN, MAUREEN ANDARY, JONATHAN SLOANE, THE TRUEHEARTS, TIMMIE METZ, ROBBIE COOPER, DAVE YLVISAKER, DAVE EGELHOFER, MIKE MILLS, TOM HELF, BRIAN GODDARD, MATT SPIELMAN, BUDDY GRIFFIN. This show often sells out so grab your tickets soon!

The legendary music scene found in Los Angeles and its neighboring magic-struck neighborhood, Laurel Canyon, are the focus of this show from Newmyer Flyer. Celebrating the musical brilliance of more than a dozen legendary bands and performers who lived and made their music in and around L.A. “Laurel Canyon: Golden Songs of Los Angeles” features a dream lineup of some of the D.C. area’s most accomplished and exciting young artists. Catch them together in this extraordinary show as they take on a treasure trove of great songs including ; So You Want To Be A Rock & Roll Star, For What It’s Worth, California Dreaming, Carry On, Doctor My Eyes, God Only Knows & other classics from the era.

The heart of the Laurel Canyon sound encompasses such harmony driven bands as Buffalo Springfield, The Mamas & Papas, and Crosby, Stills & Nash and also encompasses the startling creativity of Joni Mitchell, The Byrds, and Beach Boys as well as the noir-ish sounds of The Doors. As the 60’s turned into the 70’s, the Laurel Canyon sound ruled the worlds airwaves, and is most associated with singer- songwriters like Joni Mitchell, & Jackson Browne. Laurel Canyon’s long history as a home to emerging artists continues today, but perhaps was never as ascendant or as charmed, as in the mid to late 60’s. Laurel Canyon: Golden Songs of Los Angeles 1966-72 will carry you back to that time, and take you on a starlit journey, as we dive deep into some of the greatest popular music ever made.